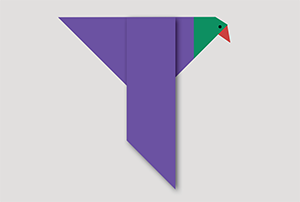 Fold an origami kererū and upload your photo to social media using the #greatkererucount hashtag! Check out KCC’s website to download & print a pattern or use a square piece of paper & decorate it yourself. 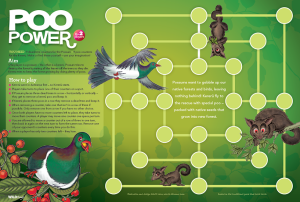 In this game, possums want to gobble up our native forests and birds, leaving nothing behind! Kererū fly to the rescue with special poo – packed with native seeds that grow into new forest. 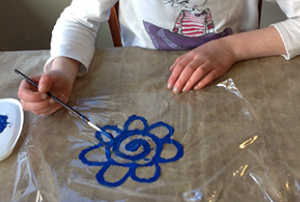 Kererū don’t see windows. Sometimes, they fly right into them and are injured or killed. You can help by putting decorations on your windows to show them something’s there or make these kererū protectors for home! 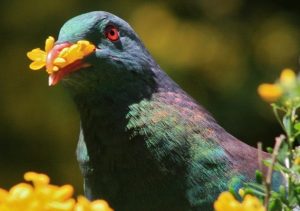 How much do you know about our charismatic kererū – also known as the New Zealand Pigeon, kūkū or kūkupa. Test your knowledge on all things kererū with this KCC Quiz!

This resource will help teachers to develop a lesson unit about the New Zealand pigeon — also known as the wood pigeon, kererū, kūkū or kūkupa.

The kererū is New Zealand’s only native pigeon. They are endemic to New Zealand, meaning they are found nowhere else in the world. They are important in Te Ao Māori for many reasons are can be found throughout Māori waiata and stories.

Kererū eat mostly native fruits, but also leaves, flowers, and introduced plants – such as plums! They are the only living New Zealand bird that is able to swallow the largest seeds of our native trees such as tawa, miro, karaka and pūriri. This is important as it means they are the only bird able to distribute these seeds (via droppings).

Kererū breed slowly, and eggs and chicks are eaten by predators such as stoats, possums and rats.

Go out and observe some birds! What do they look like? Think about the size, colour, shape of the beak, feet. What are they doing? Why do you think they are doing it?

Introduce the kererū using a story – such as Wildstories Kererū: New Zealand Pigeon by Andrew Crowe and Peter Campbell, Kiri the Kererū by Janet Martin or the story of Maui changing into a kererū.

Discuss what the kererū looks like. Show its size by equating it with something familiar, a toy maybe. Pass around an item of the same weight as a kererū – between 400 and 650 grams (a 500g block of butter is about right!). Is the kererū bigger than other garden birds? (Yes!). Have a quick look at birds that are sometimes mistaken for kererū – e.g. tūī, magpie, the rock pigeon.

Introduce the term ‘gape’. It means ‘the width of the open mouth’. Explain that kererū has a very large gape. This means they can swallow fruits much bigger than their beaks. Pass around some oranges or apples – can the children swallow things bigger than their mouths (without biting)? No! The kererū’s very wide gape allows them to swallow fruits with large seeds, such as tawa, puriri and karaka fruits. They then drop the seeds in different places when they poo. In this way, they are like gardeners! No other NZ birds can swallow these fruits whole. Without kererū ‘planting’ seeds, we could lose some native trees forever.

Do the Great Kererū Count!

Once outside, if you are standing still and looking, spend at least five minutes spotting kererū. Look in trees, in the sky, on powerlines… or go for a walk to a nearby park. If you’re walking and looking for kererū spend at least 30 minutes looking.

If you don’t see any, don’t be disappointed. It’s really important in science to record when things don’t happen, as well as when they do. A ‘zero count’ is very useful information.

Read more about taking part in the kererū count.